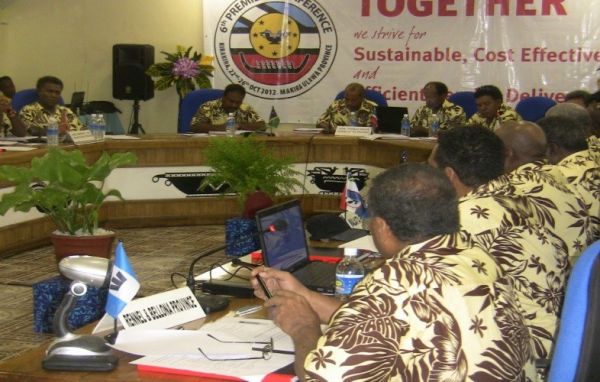 Accepting the key to the first ever provincial assembly building of the provincial government for Makira Ulawa Province for 34 years was indeed a momentous occasion.

It was a moment that went down as a historic day in the history of Makira Ulawa.

The head of the 6th Premiers Conference delegation, Honourable George S. Lilo, Premier of Western Province, on Monday 22nd October 2012, formally handed over the key to the provincial assembly chamber to the Speaker of Makira Ulawa Provincial Assembly, Honourable Jerry Haga. Premier Lilo headed the delegation on behalf of Hon. Silas Tausinga, Minister for Provincial Government and Institutional Strengthening who could not attend the official ceremony of the handing over of the assembly chambers on Monday.

In handing over the Chamber to the Speaker of the Assembly, Premier Lilo indicated that the completion of the assembly chamber was indeed historic and further described it as a turning point in the history of the provincial government of Makira Ulawa. ''The assembly which is one of the most important political institutions of the provincial government now has a permanent place to deliberate on important legislations that matter a lot to the people of this province'', he said.

The construction work on the provincial assembly chamber commenced in the month of June 2011 with initial funding from Provincial Capacity Development Fund (PCDF) and the own resources from the provincial government of Makira Ulawa. The provincial government stepped up its funding and also mobilised additional resources through the Premiers conference budget of the Ministry of Provincial Government and Institutional Strengthening only after successfully bidding for the 6th conference in Taro in October 2011.

The construction of the chamber cost about SBD1.3m. 47% of this was funded by the Ministry of Provincial Government Institutional Strengthening through the Premiers conference budget, 30% was funded by PGSP through PCDF and 23% from the provincial government own source revenues.

As indicated in the various speeches during the official handing over ceremony, the provincial government of Makira Ulawa described the assembly as a remarkable achievement. It is an infrastructure that shall continue to serve the assembly for so many years to come.

The head of the Premiers delegation confirmed that the funding of the chamber by the MPGIS, PGSP and the MUPG did not only provide a magnificent asset for the province but it had also built the capacities of its young people through job creation. About 47 young people were engaged by the contractor during the construction. The youths did not only earn income from their work but also enhanced their skills and experiences in various aspects of infrastructure work through on the job training. This has been described by the Provincial Premier as important in the sense that it creates a pool of skillful young people. In the future, the province can rely on that pool of skilful youths and call on them to provide services when necessary.

In addition to funding the construction work on the chamber, the Ministry of Provincial Government and Institutional Strengthening provided furniture sets for the chamber for use by the 20 member provincial assembly with two air conditioners for the offices of the Clerk and the Speaker. A microphone set costing about SBD176, 000 (USD24,100) has also been ordered by the Ministry for delivery to the assembly. The microphones are equipped with a digital recording system that can record assembly proceedings on a hard disk or remote media that can be transferred to lap tops for editing and production of hansard by the assembly clerk. This is considered important as it would enhance the ability of the Clerk to produce minutes of assembly proceedings on time. Currently the minute taking of the provincial assembly proceedings of Makira Ulawa is being contracted to a third party.

A standby generator of 15 KVA was delivered by the Ministry for use in the provincial assembly. In his closing remarks of the 6th Premiers conference, the Permanent Secretary of the Ministry Provincial Government and Institutional Strengthening, Mr. Stanley D. Pirione, described the generator as very essential in the sense that it would ensure that there is continuous flow of electricity to the chamber and that assembly proceedings are not affected by erratic and intermittent power cuts by SIEA. This was applauded as important gift of the conference to the people of Makira Ulawa.