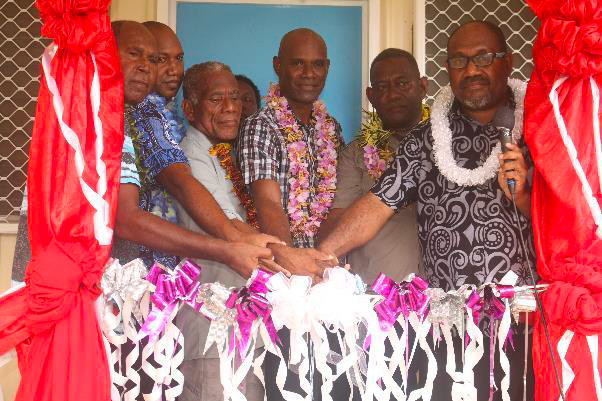 A newly built Rural Health Centre in the Malatoha area in the village of Chichinge was on Wednesday handed over to the community by the Permanent Secretary of the Ministry of Provincial Government and Institutional Strengthening, Mr Stanley D. Pirione. The centre is set to promote access to health facilities within the area and address the medical needs of the people especially women and children of Malango Ward in Guadalcanal Province who have for long been walking long distances to access health facilities.

Speaking during the official opening of the new Chichinge Rural Health Centre, PS Stanley Pirione thanked all the parties that were involved in the implementation to ensure a successful completion of the project. The PS hailed of the joint efforts of the Planning Division of Guadalcanal Provincial Government and National Government through MPGIS in partnership with local communities. “The national government does not forget the wishes of the Provinces in the development of their infrastructures, whether it be institutional, civil, social or educational, said PS MPGIS. The PS informed the GPG that the Ministry will continue to deliver what it is mandated of the Provincial Governments in coordination with the sectoral Ministries.

In his brief remarks, the Provincial Secretary of GPG, Mr. Timothy Ngele reiterated the need for the community to take care of the clinic and ensure maximum utilisation of this important assets of the community. He thanked the MPGIS, the PGSP and the SIG for the funding and the continuous training and guidance that enabled them to deliver such high profile projects.

Care-taker Minister for Health for GPG, Hon. Brian Tuva told the gathering that this new development demonstrates Guadalcanal Provincial Government’s unprecedented commitment to advance health and medical services to its people wherever they may live. The Minister added that it is the responsibility of the Province to ensure people have access to the health facilities as and when required.

The former MPA for Malango Ward Mr. Keith Amosaea underlined the strategic location of the Chichinge Rural Health Centre, which he said will be a great platform to solve women and children’s health and medical challenges of not only Malango Ward but surrounding communities as far as Bamuta in the Goldridge area and the great inner plains of North and central Guadalcanal. “It has been a long time since we struggled for a health service facility and now we have one” he told the cheering crowd of various communities. The villages turned out in large numbers to witness the official opening of their mini hospital, something they have been yearning for for so long. For many of them this was indeed a dream come through in a life time. The former MPA thanked the Ministry and the PGSP for the delivery of PCDF funds to facilitate the construction of the clinic. He commended the PCDF for bringing infrastructure to needed communities to improve their living conditions.

Director of Health and Medical Services for Guadalcanal Province spoke highly of the efforts of the former MPA, who through the Province secured the PCDF and implemented by GPG. The Director, Dr. Joel Denty, told the meeting that health statistics shows that Guadalcanal population has the highest number of people without access to health facilities including the ratio of nurses per thousand population. He stated that the establishment of the rural health centre is indeed highly appreciated as it is also in line with the role delineation policy of the MHMS. Dr. Denty stressed that the Chichinge rural health centre was constructed according to recommended design which caters for special storage facilities for drugs and medicines, specialised equipment, confidential consultancy space, even ramps so that specially-abled persons can access it without much difficulties. “You are lucky you are one of the first communities in the Solomon Islands to receive such specialised facilities” he told the crowd. “I assure you that I shall send you an officer when accommodation issues are sorted out” he continued.

The new rural health centre is a permanent building with a raised floor and is installed with solar facilities. Electrical wiring is installed and only require furniture to be installed and drugs to be stocked.

Rickson George of R&D Construction Enterprises said he was very honoured to have been given the opportunity to build the facility for the people in Malango Ward. Mr. Rickson employed 15 qualified people and 5 highly experienced and qualified technical people with one female as administrator for his company. The contractor said that he normally pays $2,000 for community groups who come out in numbers for communal labour support towards the construction. He said he paid his labour force at $10.00 per hour, which he said had immensely contributed to the local economic growth.

A number of speakers from the communities gave few remarks in which they acknowledged and appreciated everybody who in one way or the other contributed to the project to facilitate its timely delivery. A representative from the women gave remarks in appreciation of the centre and the efforts of all parties involved on behalf of the women and children. She described the health centre as a great relief for the women and children since they would not have to face discrimination any more when they go to far away clinics to seek health and medical attention. Like all other speakers, she appealed for great care to be given to the building.

The day was indeed a big day for the people of Malango Ward as there was feasting and lots of live entertainments. The invited guests to the occasion were treated with traditional warriors welcome and sweet marching band singing and escorted the guests to the highly decorated arena where official programme was held beside the new mini hospital. Traditional gifts (chupus) were also presented.