For those who have been following the capacity building efforts of the Provincial Governance Strengthening Programme (PGSP), which is being implemented by the mother Ministry of Provincial Government and Institutional Strengthening, MPGIS, would not be very surprised to learn that the Provincial Government of Isabel has landed a clean audit report 2017/18. This is an achievement of monumental proportion resulting from the consistent efforts of the Hon. Premier James Habu and his hardworking administration team in Buala. It is the first time a government agency clinches such an excellent audit report since independence in 1978.

Under his leadership, Isabel province secured qualified audit opinion in 2014/15, 2015/16 and 2016/17 and eventually a clean audit report called "unqualified" audit opinion declared by the Auditor General of Solomon Islands after satisfying himself that the financial statements and the transactions audited by the audit team did not indicate any material misstatement that would have rendered the statement misleading. On the basis of this assurance, the report is unqualified meaning that it is indeed a clean audit report. It may not be issue-free but the issues raised are not material enough and poses lesser risks to the public fund management.

In a brief conversation with the newly appointed Provincial Secretary of Isabel, John Mark Lukumana, he cited the following as contributing factors to their success in securing a clean audit report (that shows that the provincial funds being the SIG Fixed Service Grants, PCDF and its own source revenue are being well managed, accounted for and accurately reported):

Of course, all this would not have been possible without the unflinching support of the provincial executive in Buala who in the last four years presided over the rein of the province. The PS of IPG informed PGSP that the administration had the full support from the premier and his executive in implementing the public expenditure management reforms and public financial management reforms that are being carried out by the MPGIS through its PGSP programme. The executive, he said, fully endorsed the PGSP reform initiatives and further embraced the capacity building that is being delivered to the officers and more recently the provincial assembly members. Asked how he feels about this life-time achievement for the province, Premier Habu said, ‘’the achievement is great for the province and it should underpin future strategic development efforts. It is a moral boost for the staff since it would surely build their personal confidence’’.

The former Provincial Secretary, Mr Selwyn Vasuni, who served the province for four years as the PS must also be commended. Most of the audit achievements took place during his time. As the PS of Isabel, he coordinated the seconded and direct employees to deliver.

Mr Lokumana also highlighted the immense contributions made by his long serving Provincial Treasurer, Eileen Baragamu, who has been heading the finance team in Isabel and taking care of control measures in the treasury division. The man behind the capacity development through on the job training and mentoring has been Josef Ramo, the PGSP Capacity Development Advisor based in Buala. Given his audit background, Ramo has been supporting the treasury division in accounting, internal controls and financial reporting. His consistent support to the treasury division has paid dividend.

Asked how he may maintain such a performance in the future, PS Lokumana placed hope on the team whose efforts had led to this historic achievement. He excitedly announced the arrival of the following officers whose contributions would surely add value to the provincial operations and help to further clean up the system and institutionalise further reforms in the area of public expenditure management and governance. Recently the Ministry has provided a resident engineer (Tom Ro’Uhau), a planning specialist (Norman Hiropuhi), an accounting specialist (Ben Arilasi) who came on board in the month of May 2019. The procurement specialist has been recruited and may report to duty shortly to complete the line of specialists recruitment for the province to strengthen the human capacity for effective service delivery. With the core team now being strengthened by the Ministry, the PS has renewed confidence that with continuous capacity building and mentoring of the team by the PGSP, IPG would surely maintain the clean audit performance it has been working for since the strengthening programme started in 2008.

On the future of PGSP, from Isabel Province perspective, Mr Lokumuna urged the MPGIS to ensure continued support to the programme in the areas of capacity development of seconded officers, specialists, direct employees and the MPAs who would soon be elected to the provincial assemblies. Being a technical programme, all Provincial Authorities have been demanding officers with technical skills to strengthen capacity to deliver the programme and meet the demands of the revised Financial Management Ordinance.

As part of the recent discussions on the welfare of provincial officers by the PGSP Joint Oversight Committee, the PS of IPG reiterated the need for the programme and the Ministry to commence the process of converting provincial core officers into contracted officers on performance based. This, he said, would lead to re-design of the officers’ job descriptions with measurable indicators that would pin-point what is expected of each officer and how they would be held accountable. Now that the performance-based system initiated by the Ministry through PGSP is here to stay and is being institutionalised, the officers should thus be held accountable through the same system. The perfect aligning of the officers’ jobs descriptions to what the province is being assessed annually would be helpful to the provinces and motivating to officers. 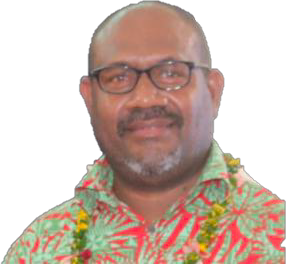 The key person behind the Provincial Governance Strengthening Programme is Stanley D. Pirione, the long serving Permanent Secretary of MPGIS who, according to the project structure of PGSP, is the National Project Director and Chairman of the PGSP Joint Oversight Committee. He has been very supportive and behind the project for continuous capacity building of provinces in public expenditure management systems, public finance and good governance. Under his leadership from 2012, the programme evolved and delivered series of invaluable mentoring and on the job training of provincial officers, which seems to have resulted to the remarkable achievement being announced for Isabel Province. His decision in 2015 to carry the training of officers and MPAs down at the provincial level where a critical mass would benefit has yielded results particularly in the area of improved understanding of processes an procedures and the need for compliance enforcement of the provincial subsidiary legislation (Financial Management Ordinance). 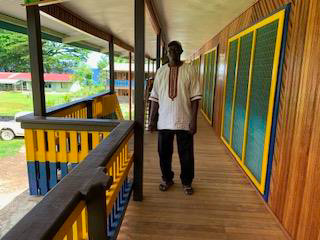 Inset (at newly completed PCDF funded six-classroom block at Fo’ondo in Northern Malaita, June 2019) is Momodou Lamin Sawaneh the current Programme Management Expert of PGSP. Momodou is conducting most of the trainings and continuous capacity building of Ministry, MPAs and provincial officers on public expenditure management, public finance, planning and governance for the past 10 years. He is one of those behind the PGSP led reform initiative through MPGIS and providing consistent policy advices and technical support on the practical implementation of PCDF Operations Procedures Manual and the recent review of provincial regulatory framework (Financial Management Ordinance) that aims at promoting greater accountability of public funds including strengthening of internal controls at the sub-national level. His expertise in public finance has led him to push for the adoption of International Public Sector Accounting 4.

Standard (IPSAS) for provinces in May 2010, being the first government agency to adopt such a renowned international standard. He has since been training officers in every aspect of IPSAS application in financial reporting. The PGSP officers are backed by the Ministry team in the finance division in their capacity building efforts to ensure provinces clean up their audit issues (Geofrey Vakolevae and Priscilla Cheka have been instrumental). The communications division of the programme (led by Baddley Nukumuna) has been instrumental in ensuring continuous visibility of the programme, provincial outputs and the impacts that are being felt by the people.

Behind the provincial success stories is the PGSP Steering Committee (members of the Joint Oversight Committee) that is responsible for ensuring that the project is steered in the right direction from the project management level to the PCDF project implementation. The committee has been very supportive of the MPGIS as the implementing Ministry of PGSP. Their decisions on issues relating to PGSP and PCDF have been of high quality and consistent thus maintaining the goal of achieving increased accountability of public funds as demonstrated by Isabel Province.

Those who witnessed the launching of PGSP in July 2008 may be surprised that within a span of 10 years such an impact is being felt across all provinces from infrastructure delivery to public sector accountability. A total of more than 1,200 high quality infrastructure projects have been delivered by the nine provinces (see Fo’ondo in Northern Malaita).

The table below shows us how far provinces have come in terms of timely submission of financial statements for auditing. The baseline data shows a deteriorating situation which prompted the SIG to conceive the establishment of PGSP and its capacity development fund. Within 10 years of continuous capacity building the situation looks radically different. It is all thanks to the continued support of SIG who is not only funding PCDF but also ensured the continuity of PGSP through phase II by providing recurrent budget support for continuation of PGSP activities. The SIG is keeping PGSP alive.